First: Okay, I said that all you need is flour and water, and strictly speaking, that’s not true: the important ingredient you’re most likely to be missing is this: a digital kitchen scale. Actually, it doesn’t have to be digital, but there aren’t a whole lot of gram-accurate non-digital scales floating around.

Second: Water. You need water. It turns out that it is possible to have problems with your water; in Maine, I discovered that our well water was acidic and had high copper. I don’t know which of these was the problem (or indeed whether the problem was something else entirely), but my yeast grew very badly there until I started using filtered water. I haven’t had any problem with the water in San Luis Obispo. I generally let it sit for a day before using it, to let the chlorine dissipate (though we may be switching to chloramines soon…). I don’t know whether this actually makes any difference.

Third: Flour. For feeding my yeast, I use 50/50 blend of Whole Wheat and White flour. Both are unbleached. Is 50/50 the right blend? I have no idea.

Note: Nothing here is written in stone, or even tested in any reasonably scientific way. It’s just what appears to work for me.

Mix 40 grams of water and 40 grams of the flour mixture, put in the glass and wait for 24 hours.

There is no step three. Just keep doing Step two, every day, forever.

Why are we doing this again? 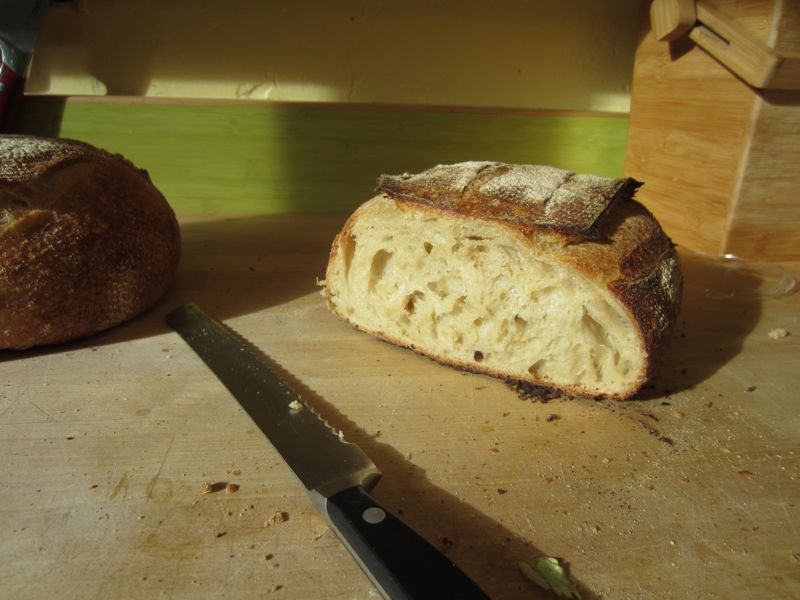 Really, this started as a fun biology experiment, and I hope you’ll try it in that light, too.

One thing to be aware of; in the first week, the mixture is still settling down, and you’re going to get some very funky smells. Like really terrible old socks. A lot of people throw it out at this point. Stick with it, and after a few more days, it should setle down into a nice sour culture that grows to about twice its original volume each day, before settling back down at about 20 hours.