I’m teaching a class to first-year college students. I just had a quick catch-up session with some of the students that had no prior programming experience, and one of them asked a fantastic question: “How do you know what library functions are available?”

In a classroom setting, teachers can work to prevent this kind of question by ensuring that students have seen all of the functions that they will need, or at least that they’ve seen enough library functions to complete the assignment.

But what about when they’re trying to be creative, and do something that might or might not be possible?

Let’s take a concrete example: a student in a music programming question wants to reverse a sound. How can this be done?

Reading Daniel Dennett’s “From Bacteria to Bach and Back” this morning, I came across an interesting section where he extends the notion of ontology—a “system of things that can be known”—to programs. Specifically, he writes about what kinds of things a GPS program might know about: latitudes, longitudes, etc.

I was struck by the connection to the “data definition” part of the design recipe. Specifically, would it help beginning programmers to think about “the kinds of data that their program ‘knows about’”? This personification of programs can be seen as anti-analytical, but it might help students a lot.

Perhaps I’ll try it out this fall and see how it goes.

Okay, it’s week four of data structures in Python. In the past few days, I’ve read a lot of terrible code. Here’s a beautiful, horrible, example:

This code works correctly. It searches a list to find the position of a given element. Notice anything interesting about it?

Take a look at the parentheses in the if line. How do you feel about this code now?

(Spoilers after the jump. Figure out why it works before clicking, and how to avoid this problem.)

It’s much closer to ‘go’ time now with Python, and I must say, getting to know Python better is not making me like it better. I know it’s widely used, but it really has many nasty bits, especially when I look toward using it for teaching. Here’s my old list:

But wait, now I have many more, and I’m a bit more shouty:

Earlier this year, I was talking to Kurt Mammen, who’s teaching 357, and he mentioned that he’d surveyed his students to see how much time they were putting into the course. I think that’s an excellent idea, so I did it too.

Specifically, I conducted a quick end-of-course survey in CPE 430, asking students to estimate the number of weekly hours they spent on the class, outside of lab and lecture.

Here are some pictures of the results. For students that specified a range, I simply took the mean of the endpoints of the range as their response. 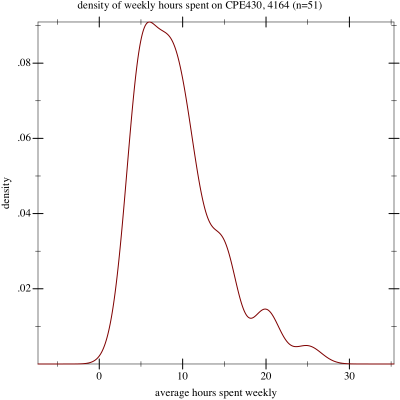 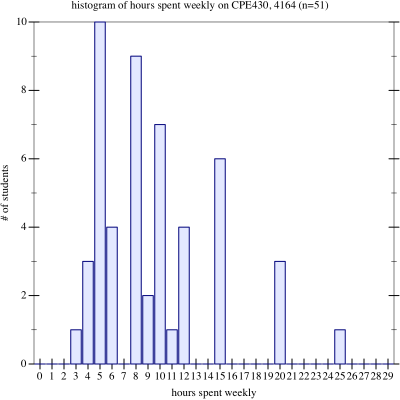 Finally, in an attempt to squish the results into something more accurately describable as a parameterizable normal curve, I plotted the density of the natural log of the responses. Here it is: 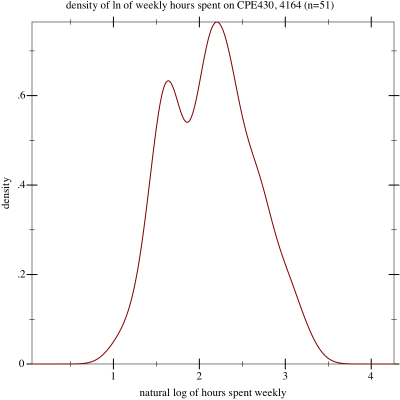 Density of logs of responses

Sure enough, it looks much more normal, with no fat tail to the right. This may just be data hacking, of course. For what it’s worth, the mean of this curve is 2.13, with a standard deviation of 0.49.

(All graphs generated with Racket.)

I’m just getting started, but already Python is looking like a terrible teaching language, relative to Racket.

So here I am grading another exam. This exam question asks students to imagine what would happen to an interpreter if environments were treated like stores. Then, it asks them to construct a program that would illustrate the difference.

By and large, it’s pretty easy to characterize the basic failing: these students are unwilling to break the rules.

One of my children is in third grade. As part of a “back-to-school” night this year, I sat in a very small chair while a teacher explained to me the “Math Practices” identified as part of the new Common Core standards for math teaching.

Perhaps the small chair simply made me more receptive, taking me back to third grade myself, but as she ran down the list, I found myself thinking: “gosh, these are exactly the same skills that I want to impart to beginning programmers!”

Here’s the list of Math Practices, a.k.a. “Standards for Mathematical Practice”:

Holy Moley! Those are incredibly relevant in teaching programming. Furthermore, they sound like they were written by someone intimately familiar with the How To Design Programs or Bootstrap curricula. Indeed, in the remainder of my analysis, I’ll be referring specifically to the steps 1–4 of the design recipe proposed by HtDP (as, e.g., “step 2 of DR”).

Let’s take those apart, one by one:

Being on sabbatical has given me a bit of experience with other systems and languages. Also, my kids are now old enough to “mess around” with programming. Learning from both of these, I’d like to hazard a bit of HtDP heresy: students should learn for i = 1 to 10 before they learn

To many of you, this may seem obvious. I’m not writing to you. Or maybe you folks can just read along and nod sagely.

HtDP takes this small and very lovely thing—recursive traversals over inductively defined data—and shows how it covers a huge piece of real estate. Really, if students could just understand how to write this class of programs effectively, they would have a vastly easier time with much of the rest of their programming careers, to say nothing of the remainder of their undergraduate tenure. Throw a few twists in there—a bit of mutation for efficiency, some memoization, some dynamic programming—and you’re pretty much done with the programming part of your first four years.

The sad thing is that many, many students make it through an entire four-year curriculum without ever really figuring out how to write a simple recursive traversal of an inductively defined data structure. This makes professors sad.

So here’s the problem: in September, you face a bunch of bright-eyed, enthusiastic, deeply forgiving first-year college students. And you give them the recursive traversal of the inductively defined data structure. A very small number of them get it, and they’re off to the races. The rest of them struggle, and struggle, and finally get their teammates to help them write the code, and really wish they’d taken some other class.

NB: the rest of this makes less sense… even to me. Not finished.

However, another big part of the problem is … well, monads are like burritos.

Let me take a step back.

The notion of repeated action is a visceral and easily-understood one. Here’s what I mean. “A human can multiply a pair of 32-bit integers in about a minute. A computer can multiply 32-bit integers at a rate of several billion per second, or about a hundred billion times as fast as a person.” That’s an easily-understood claim: we understand what it means to the same thing a whole bunch of times really fast.

So, when I write

It’s pretty easy to understand that I’m doing something one hundred times.