People often ask me what the heck is going on with Cal Poly’s nutty quarter numbering system. I’m going to try to summarize it.

Before I begin, I think I’m probably suffering from Stockholm syndrome, here; I’m kind of fond of it, even though it’s non-intuitive.

Based on a very brief conversation with Debbie Dudley, it appears that the current system was designed in 2006, during the migration to PeopleSoft. At that time, Cal Poly had to devise a system for numbering quarters both in the future and in the past (that is, the new system also had to represent existing records of past students).

The rest of this is still largely hypothetical; please feel free to write and correct me about anything I’ve gotten wrong; I think that trying to understand how the system arose helps me (and you?) to understand its quirks a bit better.

Problem: we need a way to represent a particular quarter (e.g.: Fall 2006) as a number. It would be really convenient to be able to sort in a sane way, etc. etc.

Solution: well, let’s use integers, not floats (for what are hopefully obvious reasons). Let’s use the year, then a digit for the quarter. What digits should we use for the quarters? Well, we should probably stay away from zero, because it’s not clear what year a zero would belong to. Okay, let’s use 2, 4, 6, and 8 for the four quarters. This spaces out the four quarters, and allows for the insertion of additional terms, should it become necessary.

(Knowing what I now know, I can’t see why you would want to do this unless PeopleSoft has some kind of internal restriction or performance penalty regarding numbers with more digits. Let’s assume this is the case.)

This scheme is not awful, but it does have some problems if you try to subtract numbers or increment or decrement quarter numbers, because going from a fall quarter to the next winter quarter requires adding four… unless the year is 1999, in which case you have to add 1004. Oh well.

Okay, so let’s summarize. How the heck do we actually read one of these numbers?

Actually, I’m going to be precise, and just give you some code.

Good news, folks! We’re continuing to deliver reasonably sized classes for our students. Specifically, more than 90% of our SCUs are currently delivered in classes of size less than 40. The last time we managed that was back in winter of 2011. On the other hand, if you think that class sizes should be below 30, we’re not doing so well.

I’m teaching a class to first-year college students. I just had a quick catch-up session with some of the students that had no prior programming experience, and one of them asked a fantastic question: “How do you know what library functions are available?”

In a classroom setting, teachers can work to prevent this kind of question by ensuring that students have seen all of the functions that they will need, or at least that they’ve seen enough library functions to complete the assignment.

But what about when they’re trying to be creative, and do something that might or might not be possible?

Let’s take a concrete example: a student in a music programming question wants to reverse a sound. How can this be done?

This just in, folks; evidence continues to mount to suggest that AR–15-style assault rifles are in fact extremely effective at killing large numbers of people. Not yet sure if there are any other uses for this device.

Reading Daniel Dennett’s “From Bacteria to Bach and Back” this morning, I came across an interesting section where he extends the notion of ontology—a “system of things that can be known”—to programs. Specifically, he writes about what kinds of things a GPS program might know about: latitudes, longitudes, etc.

I was struck by the connection to the “data definition” part of the design recipe. Specifically, would it help beginning programmers to think about “the kinds of data that their program ‘knows about’”? This personification of programs can be seen as anti-analytical, but it might help students a lot.

Perhaps I’ll try it out this fall and see how it goes. 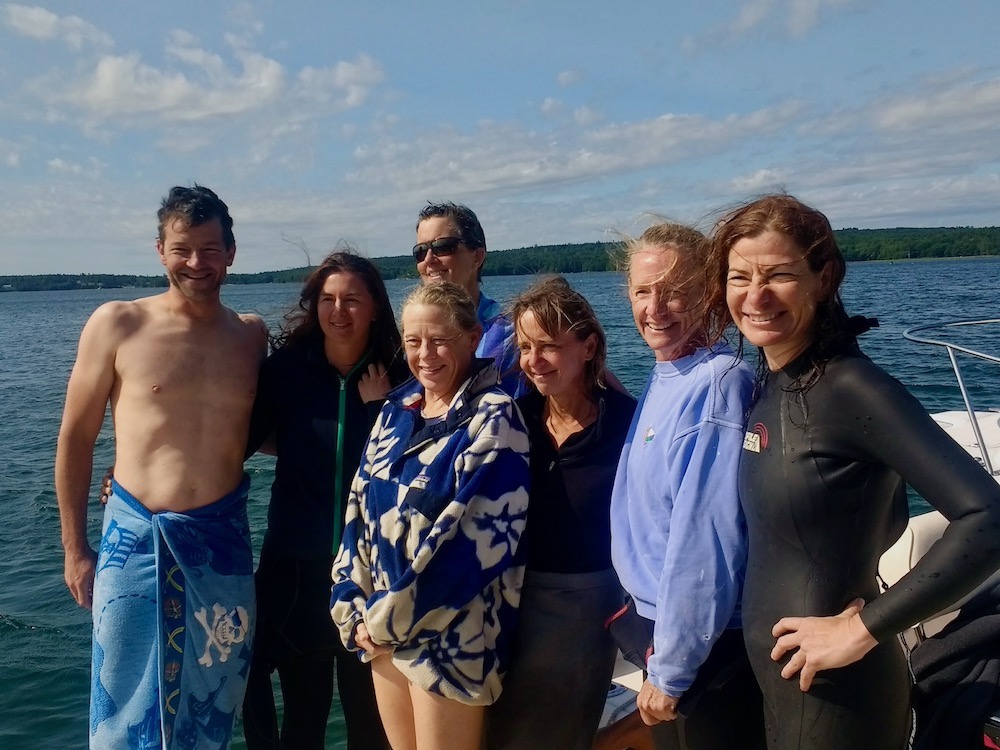 Whoops! The day is now past. The annual Granite Wo-Mon swim took place on August 6th.

Tricia Sawyer got the ball rolling this year, as she has in the past two or three, by asking when the swim was going to be. Favorable tides suggested either mid-July or early August, if I recall correctly, and we settled on the 6th.

It was an absolutely gorgeous day, and the water was drop-dead gorgeous. That is, it’s so warm that it’s killing lots of marine life. Nice for swimmers, maybe not so nice for everyone else. I swam without a wet suit for the second year running, and I have to say; it wasn’t even cold. Even jumping into the ocean at 7:15 in the morning. Not cold. I’m guessing it was above 20 celsius. Very warm.

Also, there was a good breeze at 7 AM, and it picked up steadily. The chop grew accordingly, and it took me a full 2 hours to finish, compared to 1:38 and 1:15 (!) in 2016 and 2015 respectively. Even discounting the ongoing decrepitude of advancing age (and a near-total lack of preparation), I’d say it was VERY CHOPPY.

Kudos to first-time swimmer Lane Murnik! Hope to see you many more times. Hopefully it’ll be a bit smoother next year.

Are immutable hash tables constant-time insert and lookup? Actually, it looks like the answer is “no, not really”:

This picture shows insertion time per insertion, so we’d expect to see something like a flat line. Of course, there’s a lot of hand-waving involving “as n approaches infinity” and what that actually means on a machine with limited memory, but it seems clear from this picture that if you’re creating a hash table with about ten million elements, you should probably consider using a mutable hash table; the time required to create that table will be about 40 seconds for an immutable hash table vs. about 7 seconds for a mutable one.

This graph strongly suggests that the added time is entirely GC time, assuming that GC is not running in parallel, which I believe it’s not.

Drawing this on a linear-x graph suggests that the times for the immutable hash table insertion are well below linear; I’m thinking they’re somewhere between log n and (log n)^2.

In this experiment, there are 3 million lookups on each tree size. The numbers for both of them are interesting in that they move around quite a lot; the error bars aren’t that big, and you can see (especially in the failed lookups) that there are some definite patterns. First of all, the immutable tree lookups pretty clearly display an upward trend, suggesting that lookup is actually log(n), albeit with a fairly small constant (about 20% per 10x). The lookups on the mutable hash tables also seem to be growing, though in their case there seems to be a sawtooth pattern, presumably occurring when the size of the table passes a particular threshold.

In the case of lookups, though, unlike insertion, there’s no clear mutable-vs-immutable winner, at least for the table sizes that I used. Lookups are generally around 150 microseconds, compared to about 600 microseconds to insert into a mutable hash table.

This now includes DATA classes as well as CPE and CSC classes.

Why, professor Clements, why? Why are you taking all of our loops away?

I feel like the Grinch, sometimes, taking all of the pretty little candy loops away from the wide-eyed first-year students.

But the fact is… that I really don’t like loops.

Nothing here is new; it’s just a way of blowing off steam while grading my students’ terrible, terrible code. Sigh.

(EDIT: I should add… none of this applies to list comprehension forms such as for/list; those are dandy. Not sure? Run down the list of bullet points and check for yourself.)

Okay, it’s week four of data structures in Python. In the past few days, I’ve read a lot of terrible code. Here’s a beautiful, horrible, example:

This code works correctly. It searches a list to find the position of a given element. Notice anything interesting about it?

Take a look at the parentheses in the if line. How do you feel about this code now?

(Spoilers after the jump. Figure out why it works before clicking, and how to avoid this problem.)