Well, the 2003 GraniteMonChallenge has come and gone. It did in fact happen on August 23, and six intrepid swimmers showed up at 6:00 am:

Most agreed that the water was as warm as it’s ever been, though I broke down and wore a wet suit (my excuse is that I was injured in a bike wreck) so I wouldn’t know.

The wind picked up a bit during the second half, and it was pretty choppy (well, relatively speaking) by the time we reached the Bectons’ dock. Justin, Ben, and I made the full swim, while Andy and Ted climbed out when they got bored … actually, that swim is pretty darn boring. Well, when you’re not freezing, anyway. A special mention goes to Wing Taylor, who arrived on three hours sleep and managed to whip out a broad array of strokes to make it from Long Island to the mainland, which is after all the difference between living and dying, in some hypothetical sense.

This picture (and the prior one) were taken by Wing Taylor, on a self-timer. 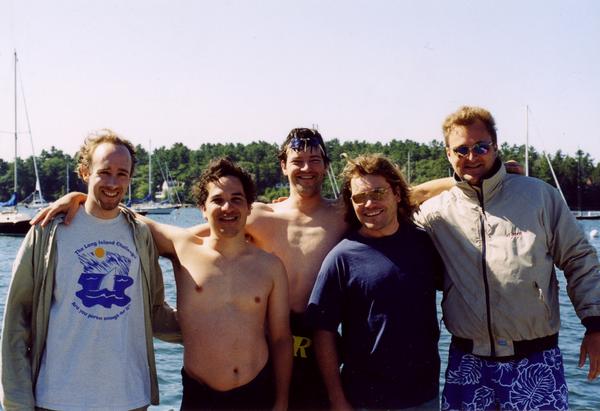 The post-swim break was leisurely and lengthy, and at noon, there was a lively discussion about whether to bike at all. I was out of the bike part (and the climb part) in either case, because of the aforementioned bike wreck. The intrepid crew:

…did finally set out, and plowed northward to somewhere near H… H… er, Bangor. This is where I took all their bicycles away and they drove north toward East Millinocket.

Here’s a picture of the three of them: 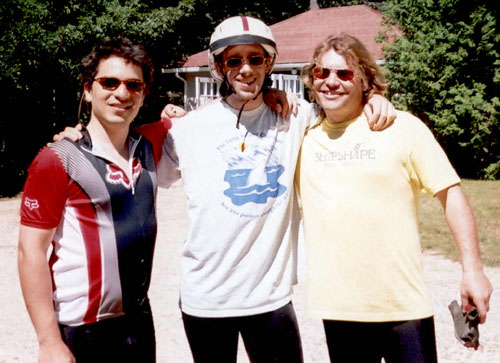 All of these pictures were taken by Abby… oh dear, I don’t know her last name. Anyone?

Well, I wasn’t there, so I really can’t say much; the day was unbelievably cold, with an early-season cold front blasting Canadian air down as far as Blue Hill. Evidently, the conditions on the mountain made it more or less un-climb-able. Details, anyone? Fortunately, Abby took a bunch of pictures. Here’s one of Abby: 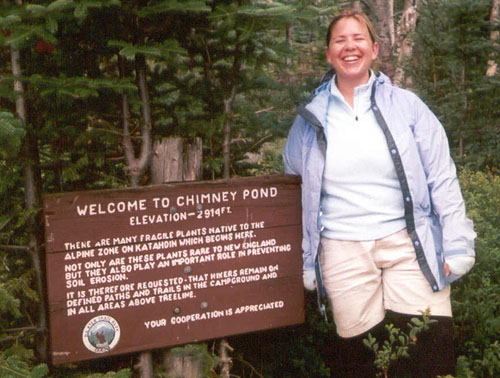 As I wasn’t here, I can only guess at a chronological ordering on these. Here’s one labeled “lunch”: 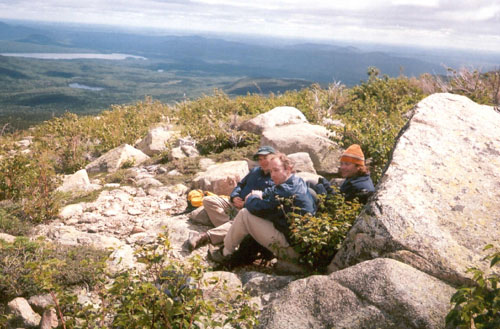 Here’s one of the lads in front of the mountain: 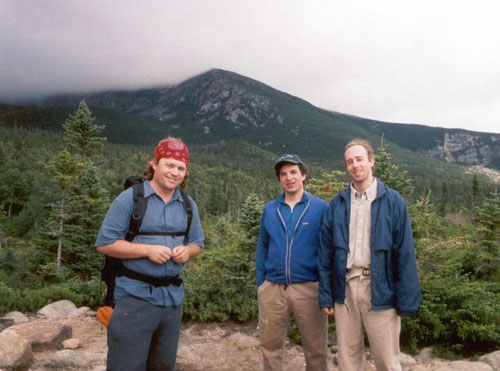 And finally, two pictures of the atmospheric conditions that made the final ascent impossible: 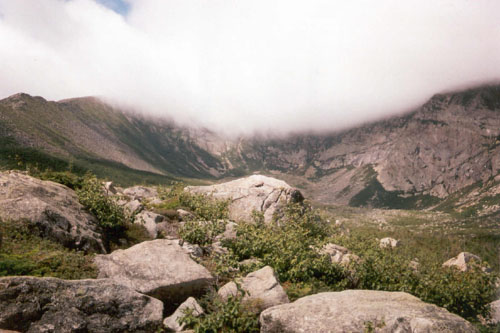 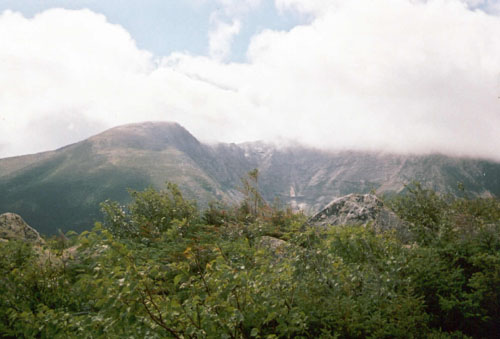 This last year: things must write about:

Well, now it’s 12 years later. What can I reconstruct?

People who were probably there:

This was the first year of the Granite Mon Challenge, including the swim, the bike ride, and the climb up Mount Katahdin.

The swim went well. I don’t remember any details.

The bike part went well, too, unless you hold our late start against us. It’s pretty hard to get moving after a big swim like that. We all met at Justin’s house after a shower, and ate a wonderful breakfast (extremely belated thanks!). Riders this year included Ben Walker, John Clements, Justin Pollard, Andy Wanning, (anyone else?) and Juan, a remarkable guy who had made his own shoes. We started in the middle of Blue Hill, and rode northward past Penobscot, Orono, (more towns, anyone?) …. Our route paralleled the upper Penobscot River, and we had many scenic stops. Some not-so-scenic stops, too.

In a roadside accident, I munched my back wheel, and sat out the last ten miles or so, until everyone threw in the towel and tossed the bikes in the back of the chase cars and motored up to that motel in Millinocket.

The next day, in our haste to get to Baxter State Park, we managed to get two speeding tickets for three vehicles. Actually, it would have been three speeding tickets had Mark Read not signalled to us to pretend we didn’t know them.

We were fortunate to get into the park, and were assigned to the Abol trail—quickest route up the mountain, involving a long clamber over a huge rockslide that happened pretty recently—in the last two hundred years or so.

At the trailhead, we discovered that there was no running water in the park. Oh dear. Being young and dumb, we decided to chance it with the water that we had; somewhere in the neighborhood of 3/4 of a liter per person.

We made it to the top pretty handily, and sat and enjoyed the truly spectacular view. Even with the park’s restriction on entry, the summit was moderately crowded, but what the hell; there’s enough lonely grandeur to go around.

What’s more humbling is to arrive at the summit alongside the Appalachian Trail through-hikers, for whom this peak is the end of a very very long road. Our achievement seems pretty mundane in comparison. It’s strange to watch these people leave the peak; they’ve suddenly turned from through-hikers back into pedestrians.

The way down was harder; I ran out of water, and started to get really really thirsty. I started to mistake the sound of the wind in the trees for running water, and when I finally did find a brook, I threw caution to the wind and had a big drink.

Gee whiz, I hope someone has some pictures.

In 1998, the Long Island Challenge happened twice, because we were badly organized and not everyone could be there at the same time.

Pictures? Description? I think Ann Neuhauser participated in both this swim and the Second one. 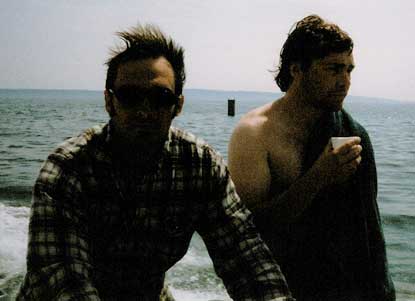 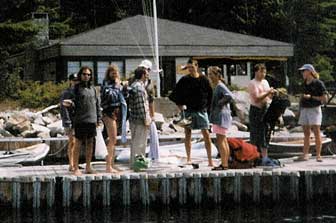 On the dock, after the swim

Brunch. Molly supplies the following list of people (with some holes): From Ben’s Head, clockwise: Ben Walker, Andy Wanning, Will Becton, a guy who hung out with us that summer, Mark Read, Sally the Yoga instructor, Alice Clements, ?, ?(looks really familiar), ?, Justin Pollard 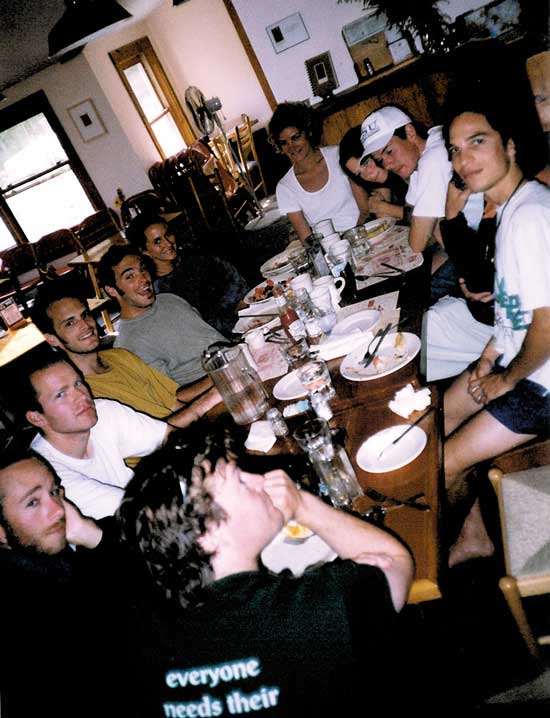 Pictures. These were taken by Robin Clements: 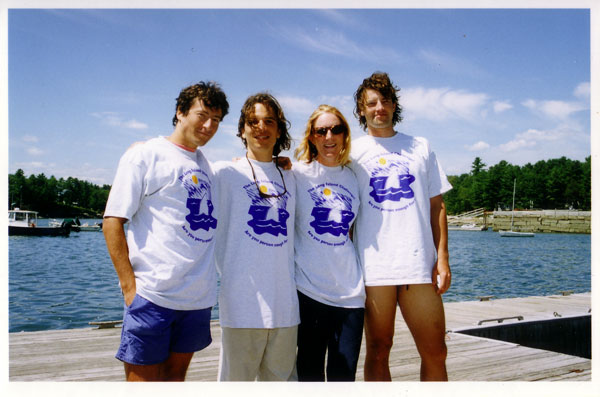 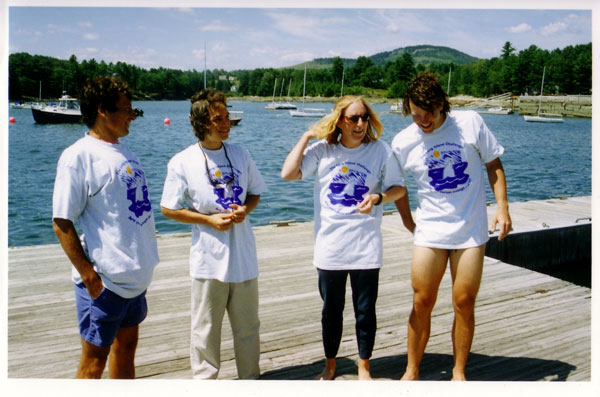 There are actually some pictures from this go-round, so you can get some idea of what the swim looks like. This was the first year with a bunch of people; It may have been the year that it got the Long Island Challenge title. Also, after the problems of the prior year, this running of the challenge featured a more organized chase boats group, with one boat for each swimmer.

These pictures were all taken by Mary McHenry, and I hope she doesn’t mind. 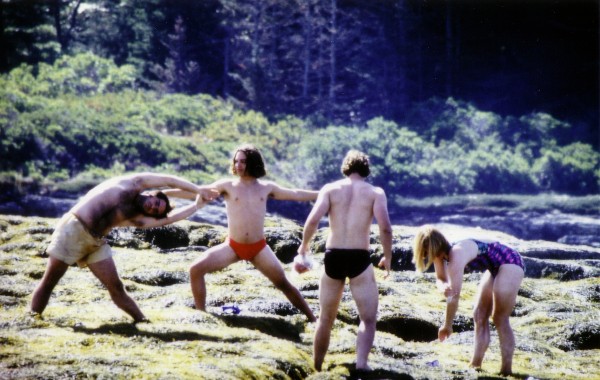 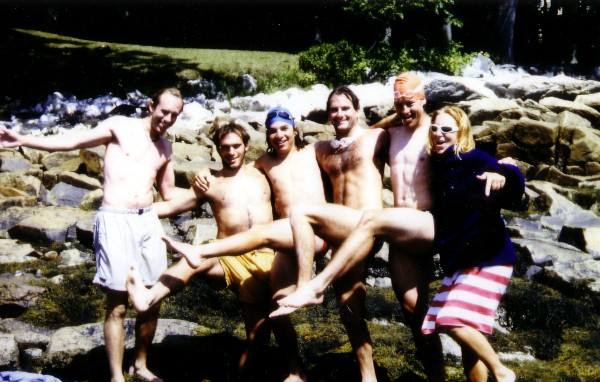 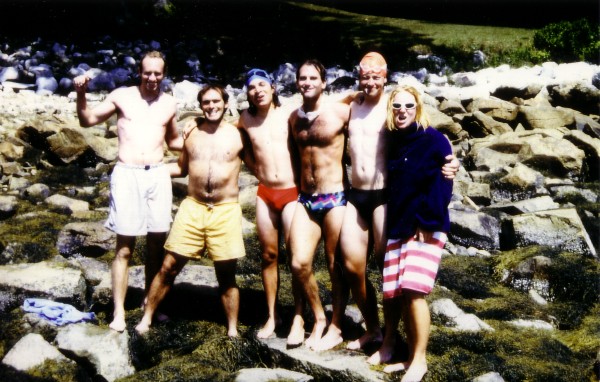 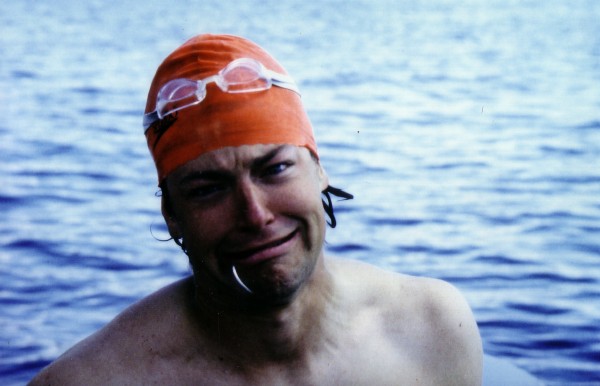 I recall this episode quite vividly, as it was the first one in which I participated. I was a last-minute addition, really. Andy Wanning had decided to do the same swim that Justin and Ben had, and wisely lined up Molly and David Gutcheon and … (?) to drive alongside him. Well, I heard about it at the last minute, I had just flown up the night before, and decided to give it a go.

Alice Clements had suggested bringing Crisco, on the principle that it would protect Andy from the cold water, and both of us lathered ourselves up with it. Then we jumped into the water. Blue Hill Bay is quite cold.

We started swimming, but we didn’t do as good a job as Justin & Ben at keeping together. I think we thought the boat could easily keep track of both of us, but as we swam farther and farther apart, it turned out to be nearly impossible. The lesson here is that it’s very hard to see a swimmer in the water at more than about fifty or a hundred yards, especially if the swimmer isn’t wearing a brightly colored swim cap.

To make a long story short, Andy and I grew sufficiently far apart that the current pulled us in different directions, and we made landfall at points that were more than two miles apart. Fortunately, nobody died, and the day ended in magnificent triumph!

This was the first year of the … silly idea. I’m not sure it had a name this year.

Really, Justin or Ben could tell you more than I (John Clements) could. Justin and Ben jumped in the water and swam from here to there (or more accurately, from there to here). They stuck together, and had (I believe) Matthew Semler and one other person following them. Ben suggests that he may have had to leave mid-swim to fuel up. Fortunately, they both made it.

I’m not aware of any photos from this year.